Old-fashioned Christmas of the future 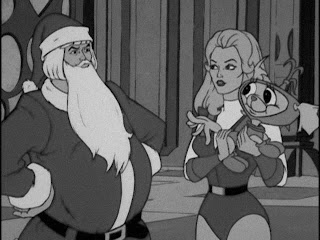 Seasons greetings Coo-Coo Cola cult members! In our first of a series of recently discovered News Reels, allow me to present a transcription of one that’s especially suitable for this time of year! I now bring you “An Eternian Christmas”!

Dateline 4400. Eternia. It’s that time of year once again and all of country has began to busy itself with preparations for a real old-fashioned Eternian Christmas. Now let’s take a look at how Citizens across the country are preparing for this very special holiday season.

In the Shadow Swamps of the Southern Bog Lands, the annual harvest of the Christmas Flash Bushes have already begun and word is we’ve got a bumper crop this year! Our hardy crew of Moss Men Workers have been pulling double shifts selecting only the finest bushes and very few Moss Men have been eaten this year! Oops, spoke too soon! heh heh! Remember boys, it’s important to distinguish the difference between the festive Flash Bush and the man-eating Tarkroot Vine.

In the Western Desert Lands where the ravages of war rage on, our fighting men, women and monsters... and robots, are helping to keep all of us free to live as we always have. So when your decorating your cozy monster-shaped and/or skeleton-shaped house this year, be sure to remember our boys "over there". Many have continued the tradition of Christmas care packages for the troops and the Eternian soldiers always appreciate a little bit of home, so the ESO is currently requesting Boiled Nighthawk Talons, Biono-Cigars, and of course, Gummy Blardz. Be sure to send our boys some Christmas Presents. As for us, our Christmas wish is that our troops send old Skeletor a "present" of his own!

Speaking of the ESO, let’s stop in on the annual Christmas concert and this year’s show was a real hum-dinger! It opened with an address to the troops from Gen. Duncan Manatarms. But no worries this time boys! The big cheese wasn’t conducting a surprise inspection! It was all about Peace and Goodwill. He wished everyone and their families the Merriest of Christmases and even promised all the hardworking troops an extra helping of roasted jungle root from the mess hall. Hahaha. Well, so much for goodwill!

After the official season’s greetings from the military brass, the real show began. The performance opened with the comic stylings of those two court jesters; Orko and RamMan. And were they ever in rare form! After a few new gags, they knocked the crowd dead with their famous "Which Mutant?" routine. You can bet that those two jokesters are headed for big, big things! In fact, they will be hitting the pewter screen next year in their first film "Orko and RamMan meet the Mer-Man". And last, but certainly not least, bringing her own special brand of *ahem* appeal to the festivities, was that super starlet Teela Manatarms. Teela performed several swell numbers, and was more lovely than the picture of her painted on the nose of a Wind Raider. Her show-stopping routine brought all our boys in armor to their feet! You can bet that there were more than a few cat-calls from the half-man half-panthers in the audience when this kitten hit the stage!

And finally the star on the top of this Christmas tree, an address by our very own kindly ruler Prince Adam! Or should we say San-tor Clause himself! Yes, the prince arrived at the Eternian Capital to bring good tidings to the adoring public. But, it didn’t stop there. Our St. Nick really got into the act, delivering 20 Attack Tracks full of presents and food to the local needy. I don’t mind telling you there was a lot of Christmas spirit in the air that day. Although Prince Adam played the part beautifully, there was no mistaking our mild-mannered monarch. He thinks that just by dawning a disguise that amounts to little more than changing clothes, he can pull the wool over our eyes. Well nothing doing! We Eternians are a little bit sharper than that. You have to wake up pretty early in the morning to fool us!

There was no word as to where He-man was during the Prince’s presentation, but hopefully he was around somewhere to protect our Prince. After all, while he may be a great and giving ruler word has it that his battle training has not gone as well as it could be.

So now we say goodbye to another Eternian Christmas. And though it will be another 413 days for the holidays to roll around again, before you know it we’ll all be building bionic snow monsters in the yard and lighting our Flash Bushes once again.

Until then my friends, from all of us to all of you, keep Christmas in your heart all the year long. Have a Merry Christmas and a very happy 4401!
Posted by Claymation Werewolf at 9:50 PM No comments: