In those shadowy and mysterious 10 years known to some as the 1980’s cartoons ruled the day. Stockbrokers would rush away from their offices to catch the latest episode of Heathcliff, GI Joe addiction clinics sprung up in most suburban areas and some of the PSA’s at the end of Brave Star episodes actually led to the ends of multinational conflicts. Among the titans that brought these hits to television was Hasbro which found a huge cartoon hit with a successful toy-line called My Little pony. But what you must remember friends is that, believe it or not, in those dark days before Brony nation, pony fandom was girl’s territory and was watched by almost no boys Network President Timothy Hasbro, wanted to change that.

﻿﻿﻿
﻿﻿﻿ At this same time a young upstart show by the name of He-Man and the Masters of the Universe was taking America by storm being that Masters had an almost entirely male persuasion. A strong effort was made in an attempt to woo the other fifty percent of the cartoon watching, toy demanding public. As a result, He-Man was reunited with his (improbably) long lost sister She-Ra The Princess of Power.

While the She-Ra toys were purchased by girls, lets face it, the cartoon was still watched by boys. It wasn’t even unusual to find boys wanting to dress as She-Ra at Halloween. And it wasn’t weird…also it was no reason to get rid of all of your son’s Princess of Power action figures, action figures Dad! Not dolls! And it was no reason to make your son try out for football when he wanted to be a cartoonist and maybe write some funny stories. Instead he had to spend his precious after school cartoon-watching time, running laps and practicing some stupid sport that he was never even interested in, in the first place.


Ahem, so in a nutshell…but of these wildly successful examples of the animated arts had a common problem. How do they widen their audience and get the attention, and more importantly money of the opposite sex? The solution was obvious. A crossover! And why not? It had been done before and with wonderful results! The Jetsons met the Flintstones! The Scooby Doo gang met the Harlem Globetrotters (and everyone else in the world) Paula Abdul even met that weird Arseneo Hall cat guy…which now that I think about it, doesn’t have anything to do with this so never mind. This problem needed more than a crossover it needed an entirely new cartoon! After all, He-Man in Ponyville would be ridiculous, by which I mean awesome but unfortunately way ahead of it’s time. No the demanding public of the 1980’s needed something they could believe something they could really sink their teeth into. They needed a He-Man that was himself a Pony! A He-Pony…A Pony-Man…or…Masters of the PonyVerse. Yes! Masters of the PonyVerse!! 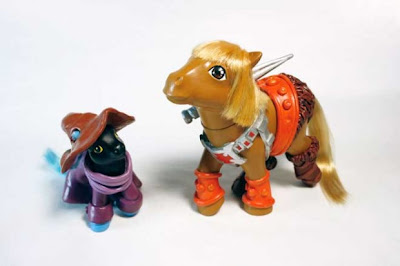 The resulting brainstorming, character design and storyboarding sessions resulted in what was described as a perfect blend of the two franchises, a sure-fire hit! Unfortunately that description was not given by the studio executives or in fact anyone in any position to purchase produce or broadcast the series. But even so, what a series it was!


The story takes place on the distant planet Barnturnia amid a time of great war. The Barnturnian Royal family faces ruin and the very real chance that their kingdom will be toppled. The Evil forces of Skeletrot have been growing in power and claiming more and more of the lands of Barnturnia for their cruel purposes. Led by wicked and powerful generals such as Trot Jaw and Beast Mane his shadowy armies thunder across the land leaving anguish in their wake. If things didn’t change soon, the shadow of Broodmare Mountain could stretch across all of Barnturnia. Fortunately change was just around the corner. Unfolding in the heart of Barnturnia was an ancient and mysterious legend. The Barnturnian Royal Prince by the name of Adam (they can’t all be Pony style names okay?) had from birth been destined for greatness. There had long been written a legend, a legend of a hero who would deliver the world of Barnturnia out of it’s darkest days. A hero by the name of He-Mane. At the age of 18, in Barnturnian pony-man years, Adam was summoned by the powerful Horseress by the name of…Horseress to the gate of the mysterious castle Grey-Stall. In an awe inspiring and far to complicated to describe here ceremony the Horseress gave to Adam the Lasso Of Barnturnia! When Adam raised the lasso above his head, swirled in around cowboy style and repeated the magic words that he apparently already knew a strange and wondrous transformation took place! Adam’s pink horse blanket disappeared and was replaced with a super butch looking harness. His coat turned from beige to dark beige and his mane became slightly darker blonde! But that wasn’t all! When he spun his lasso of power in the direction of his trust yet cowardly wagon friend, it grew and became the armor plated and much braver Battle Wagon. The best part was that no one in Barnturnia could ever figure out that Adam was He-Mane! Despite the fact that they looked almost identical to each other and they owned the only two green, tiger striped, talking wagons on the entire planet.
Spine tingling and epic adventures in which Skele-Trot and his minions would commit unspeakable acts such as ruining the party games at King Colt’s birthday party or draining the color from all of the flowers in Merry Meadow! In one especially heartbreaking episode Skele-Trot developed a “Bad Day Ray” and Zapped Man at Hooves’ Daughter Tail-la. She then spends almost a whole week in a gloomy grumpy mood. Her friends all try to combat the evil spell, by which I mean they all come up with zany ways to try and cheer her up most of which result in, you guessed it, wacky hijinks! And so it would go. Skele-Trot would come up with a moderately evil scheme using a weoponish device. He-Mane and his loyal friends would all join forces to take on his attack in friendly, safe for all ages, battle and in the end friendship sharing and happiness would win the day! In every episode. Every week! 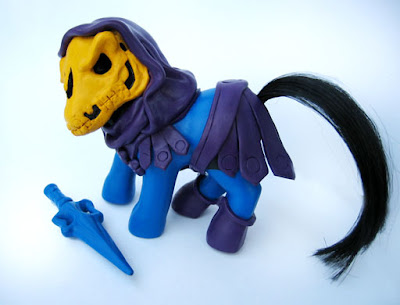 Believe it or not the show was never aired. A pilot exists online but few aside from those of us in the retro cartoon blog illuminati have ever seen it. There were even toy prototypes created and the photos leaked to the internet. The entire concept seemed so beyond belief that those who have seen them mistook them for homebrew modified my little pony toys. Even the Retroist himself presented one of the Masters of the PonyVerse toys in this fashion. It was out of fear of getting my second verbal reprimand and finding myself on blog-probation that I didn’t question my bosses article. Now however I find myself with the need to speak the truth. For those fans out their who thought My Little Pony could use a lot more sword and sorcery or who always found Masters of the Universe a little bit to bipedal, there are options. Masters of the PonyVerse has found quite the underground following online. There are illustrations, costumes and yes there has even been talk of a PonyVerse videogame! Though that talk mostly came from me and no one seems to have bitten on the concept yet…though if any of you have gaming connections we can make this happen! Huh? Huh?


Though it is nearly impossible to find My Little Pony fan fiction online, my sources tell me that there are some fantastic He-Mane stories out there. I have yet to read any of them however because while I respect people who can spin great fictional stories, I myself try to stick with the facts.
Posted by Claymation Werewolf at 6:08 PM