Most people think the world of Horror fandom is like a family. They believe that there is an overwhelming sense of acceptance and community and that we all stand united, hand in hook against whatever adversity the world can throw at us. For the most part this is all true but there is another side to the horror world as many of us know. It can be sinister, it can be competitive…I’ve only been a horror blogger for a couple of months and I’ve already been shot twice! Yes, the sad truth is that no matter how harmonious we like to imagine this world is, there are things that divide us. Freddy or Jason?….Fast Zombies or Slow? Kane Hodder or Derek Mears? Evil Dead or Army of Darkness? Any of these questions can cause an instant eruption of war between your average dedicated deadite but there is a deeper fault line running through the horror community for decades threatening to tear apart the very fabric of everything that we have worked so hard to build. 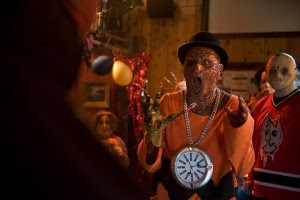 It will come as no surprise to anyone that I am talking about the Hip-Hop Horror Turf Wars that erupted in the late 1980’s and have only gotten stronger since. When hip hop or “rap” became mainstream it almost immediately began to take off in popularity. Along with its meteoric rise it ignited incredible passion among its fans. That passion took the form of completely new forms of dance, an unprecedented level of poetic expression and the light speed evolution of electronic music. Unfortunately that passion came with aggression, division, and sometimes even violence. Once the world of rap entered into its inevitable partnership with horror movies the division only became worse.


It began small, various hip-hop artists speaking about their fandom of slasher films, giant monsters, and the supernatural…horror directors like Sam Rami and Wes Craven taking on DJ duties at some of the hottest LA nightclubs, and who can forget Stephen King’s short lived segment on Yo! MTV Raps. Soon every monster, unearthly creature and undead slasher began to actively campaign for hip-hop representation. They arrived in Los Angeles by the dozen going to the offices of major record labels, meeting with top executives, slaughtering them and then starting the process all over again. Finally gold was struck, the all American first family of spooky entered in to the ultimate partnership with a struggling, up and coming rapper by the name of MC Hammer. The collective life experiences and vibrant lust for life enjoyed by the Addams’s seemed to be just what Mr. Hammer needed and he was plucked from the depths of total obscurity soon becoming the toast of the town with hit record after hit record. His popularity grew so much that at its peak he became nearly too legit to quit.

After Hammer’s success the floodgates opened and rappers were joining forces with masters of monster movies all across America. Will Smith or the “fresh prince” as he is known on the streets joined forces with the imitable Frederick J “Freddy” Krueger, when Krueger himself senselessly murdered Smith’s long time partner DJ Jazzy Jeff. Smith later said that the rhymes he created with Krueger where not only the freshest he had ever created but also the dopest. He also proclaimed Freddy one of the best natural scratchers he had ever seen. The arrival of the Fresh Prince marked a 180 degree turnaround in Krueger’s career following the end of his 8 year partnership with the Fat Boys who, after defecting from the Krueger Camp announced a newly signed contract with Michael Myers. 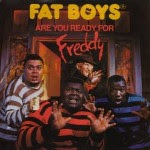 Their first hit song under the agreement “Devil’s Eyes (Pass the Fries)” shot straight to the top of the Killboard Top 100 Horror Charts. It wasn’t all success though …for instance when Chucky and Vanilla Ice formed their infamous White Boys and Killer Toys alliance it turned out to be a huge flop and effectively ended both of their careers. And Young MC’s ill fated “Dance Off“ with Pumpkin Head in the follow-up video to his hit “Bust a Move” became a laughing stock.


Some people weren’t content to enter into collaborations, and became crossover artists in their own right. When C&C Music Factory released their single “Things that Make You Go AAAAAHHHH!” The world fell in love with their new blood, gore and pyrotechnic driven performances. Even international artists got into the act. Seamus O’ Shame (The Leprechaun) actually became a rapper. He made his debut with a song entitled “Lep In The Hood” at the end of a movie with a very similar title. After releasing his album he realized he could lay down some ill tracks and bring people unspeakable pain at the same time and he never looked back 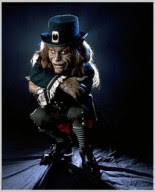 While the def jams were flying fast and loose and the money was rolling in, there was something much more ominous brewing below the surface. Turf wars and minor scuffles had began to break out as to who ran what horror neighborhood. The leprechaun laid claim to the Tiny Terror Zone which did not go over well with Chucky or The PuppetMaster Puppets. Jason and Michael Myers left untold death and destruction following the terrifying Silent Lumbering Killer Wars of ‘83.… It all got bad and then it got worse. For decades, record labels and horror movie producers turned a blind eye choosing to focus only on the millions of dollars they were raking in and ignoring the loss of both life and street cred. Sadly, something happened in 2010 that would make the world take notice, when Jackie Earl Haley and Samuel Bayer conspired to do the unthinkable. They murdered Freddy Krueger in cold blood. The worlds of horror, hip-hop, and hip-hop-horror fell silent. They realized that money and fame had gotten in the way of what really counts, poetic expression…and ultra violent gory movies. It was decided by all parties involved that everyone needed to get back to basics and to start doing what they did best. With that in mind, all horror/rap partnerships were dissolved.


Recently it seems as though there have been signs of a mild renaissance in the world of horror rap. Will Smith in partnership with the Saw franchise released the song Getting Jiggysaw With It and it seems to be doing fairly well in the charts so far. We can only hope that this time things will be different. That we can have a real sense of community and produce works that are all about art and not about money or “turf”. Together we can live in a world that undead, horribly disfigured, psychotic serial killers like Freddy Krueger would be proud to call home. With that in mind I hope that each of you can sit back, relax…and have a nice day!
Posted by Claymation Werewolf at 3:00 PM