You’ve been Pony’d or Confessions of a Brony

Sexism is supposedly a very terrible thing, its horrible fingers reaching into every aspect of our society from music to movies and sadly even to childrens toys. We’ve all seen the incredibly offensive items; the toy shopping carts, the miniature kitchens, fake vacuums and worst of all, the baby dolls! They come in all shapes and sizes with diapers and pacifiers and tiny strollers. They talk, they scream, they cry, etc…in fact some of the more expensive models are nearly as disgusting as having an actual baby. Several individuals and groups saw these toys as early indoctrination. They believed that what some saw as innocent playthings were in fact tools, intended to train young girls to become housewives and mothers.


Now friends, you and I both know that a woman’s place is obviously in the home. They are nurturing, organized and caring but in the long run they are vastly inferior to the powerful dominant force known as man! As this truth was lost on society, soon a cry went out for action. Girls had to be given hope for a stronger future; they needed toys that would help to guide them into the workforce, into the world of big business and ultimately into the world of gender equality. But what career? Being a riveter at the shipyard was not as relevant as it had once been and nobody ever seemed to want to work in the salt mines. Finally the answer arrived and it could not have been a more obvious choice. The future of women workers was in the fast growing field of Horse Ranches! There could not be a more ideal job for womankind than horses. Brushing hair. Riding the range, feeding sugar cubes to things and of course, rustling up them dogies!

At any rate, horses were the answer. Through a combination of his iron-fist like control of congress and the fact that several major toy companies were deeply in his pocket, President Jimmy Carter enacted emergency toy legislation that would immediately divert all government funds to the ever important Plastic Toy branch of the Federal Government.

The design, prototyping, and heavy production that followed, would have made an amazing black and white newsreel in the 1950’s and the end result was the creation of plastic gold. A series of toys that I like to call My Little Pony. My Little Pony took the world by storm and instantly became the hands down most popular multi-colored cartoon horse based line of toys in America. Girls everywhere could not get enough of them and soon the merchandising world took notice. There was My Little Pony lunchboxes, My Little Pony book bags, My Little Pony bikes, My Little Pony belt sanders, My Little Pony cigarette lighters to light you’re My Little Pony cigarettes! I could go on and on (and would only get more ridiculous.) Yes dear readers, it was a sight to behold and unlike any other government program ever, it had the exact result that it was intended to have. Girls all over took the love and curiosity spawned by the toys and transferred it to living horses suddenly female enrollment in major horse universities skyrocketed and young women were joining horse track bookie apprenticeship programs at unprecedented levels. Within 12 years, women controlled nearly every aspect of the horse industry, ranging from major horse breeding programs, all the way to Elmer’s Glue and it was quite a change. Women applied everything they had learned from My Little Pony to their new found expertise…with mixed results. 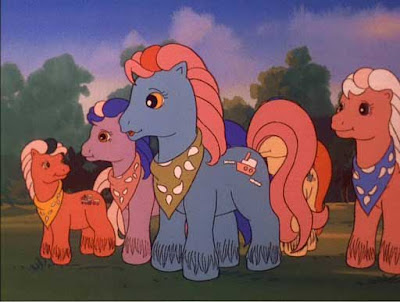 While horses now felt like distinct individuals with something special to offer and their own wonderful way of bringing joy to the world, not all was rainbows in the ranks. The decision to dye all horses pink, baby blue, and bright peach cover them in glitter and place an adorable and individual mark on each horses flank set the rodeo industry back decades. Once noble jousting tournaments at renaissance festivals had now become precious and delicate frolicking spectacles. Eventually the Council of Female Equestrian Experts realized the error of their ways. They decided that horses didn’t have to be exactly like My Little Pony, besides, their eyes weren’t nearly big enough and the horns kept falling off of the “unicorns”. Men and women decided that they could work together; that no gender should have any specific claim to the workforce of the USA! There was room for everybody! Ever since those dark days, women have proven themselves to be wonderfully productive member of society as nurses, teachers, secretaries and librarians! I have lived my life thinking that the infiltration of My Little Pony into the very fabric of our culture was over. This year I have discovered a shocking and terrifying fact the ponies are back!


In my unending dedication to all of you and to society as a whole (and most importantly to my own piece of mind), I decided to risk life and limb and begin the daunting task of investigating these new ponies on the block. I knew what I would have to do, in order to get to the heart of the matter and find out what these heathen horses had in store for us and that kind of disharmony they planned to send us in to I would have to view their propaganda. I would have to watch an episode of My Little Pony: Friendship is Magic. I have to be honest, My Little Pony had a very powerful effect on me that can best be characterized as confusion. First of all the show had nothing to do with training young girls to be experts in horse care and grooming…in fact, humanity was not even represented on the show. In its place was a world run entirely by horses. With human dwellings, furniture and equipment that has been adapted for use by ponies. Now, even disregarding any thoughts about “a planet where Ponies evolved from Men”, it leads one to wonder, that if the creators of the G4 My Little Pony aren’t intending to brainwash our youth toward a sinister future enslaved by the military industrial complex then what do they want? Another strange thing is the title… Friendship is Magic. For one I have always considered friendship and humanity in general something to be avoided and shunned at all costs. Additionally, aside from the blockbuster film The Craft, I have never encountered a situation in which friendship is magic.

It quickly became apparent that watching one episode of the mysterious show would not sufficiently expose the truth behind the flash animated façade. I would have to go once more into the breach and watch an additional episode. Soon I had watched five episodes of the show and was well on my way to viewing more (in the interest of investigative journalism). I worried that I might not be getting the full effect of the MLP experience I enlisted the help of some of my close personal friends (consisting of a motley crew of mad scientists and cruel villains). I gathered these vicious titans of the unknown, these black-hearted living monsters under the shroud of nightfall and together we had…My Little Pony Viewing Parties….where we lounged in nightmarish sinister glee watching a cartoon, and wickedly ate pony-shaped sugar cookies and fruit punch!!! Mwaha mwahahahaha! 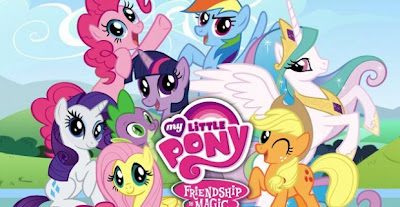 We watched show after show and still I was unable to uncover the secret that I knew dwelled beneath the surface…I had to dig deeper. I went infiltrated a secret marketplace known to some as eBay. And purchased a piece of the uniform commonly found among the wildly dedicated fans of this program or “bronies” as they are known in this elusive world. Since I was in the marketplace I picked up a Pony hoodie and a couple more shirts as well, you know, to help me find the truth. If at this point any of you have began to think that I actually LIKE this show, I am outraged! I am a professional retro-reporting-werewolf-author-villian…scientist-person-thing and I have my dignity. With the utmost dignity I subscribed to an online RSS feed that gives its readers the latest awesome news and happenings in the rockin’ world of PonyVille. I have begun to learn more but a little more digging definitely wouldn’t hurt.


While pouring through some of the evidence I obtained in my search I realized an interesting fact. While the show extols the virtues of friendship and acceptance, the fans of the show are some of the most judgmental people I have ever encountered; ready to immediately jump to conclusions about someone right after meeting them. Case in point; I purchased a full access four day pass to a national My Little Pony Convention and within minutes of stepping through the door the other people in attendance labeled me, on sight, as a fanboy. I want to state in no uncertain terms that just because I was at the convention and happened to be wearing a sassy rainbow wig and fake wings does not mean that I love My Little Pony or wait with unbearable anticipation for each new episode to arrive on my DVR!

I feel that even you, my loyal CooCoo Cola Cult Members, have taken the opportunity of this article to accuse me (even if only in your minds) of being a fan or being a brony. Well let me tell you this, it just isn’t true. Now if you’ll excuse me I have to finish writing my post on this scroll, allow my loyal dragon sidekick to engulf it in the flames of his magic fire breath thus sending it riding upon a magical river of smoke into the castle of Princess Retroist-Celestia. After my work is done I’m going to watch a marathon of my MLP season one VHS tapes that I recorded. While I’m doing these things I want you to think about what you’ve done, and how falsely you judged me. 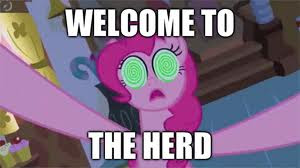 Posted by Claymation Werewolf at 3:28 PM