We all remember the heartwarming book “Corduroy” by Don Freeman. This tale of an adorable Bear’s quest to replace the missing button on his overalls. 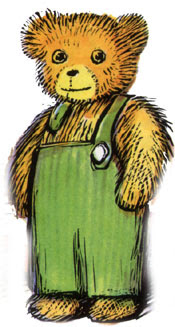 This journey eventual ends with him finding something much more valuable; a new home (spoiler alert!). His plush adventures were an inspiration to all of us and at the same time, helped contribute to our generation’s crushing sense of guilt whenever we, for any reason, separate ourselves from our childhood toys.


Yes, we all know the story but what you may not know is that in 1989, that story was almost sullied forever. And by sullied, I mean made more awesome than any of us could possibly imagine. 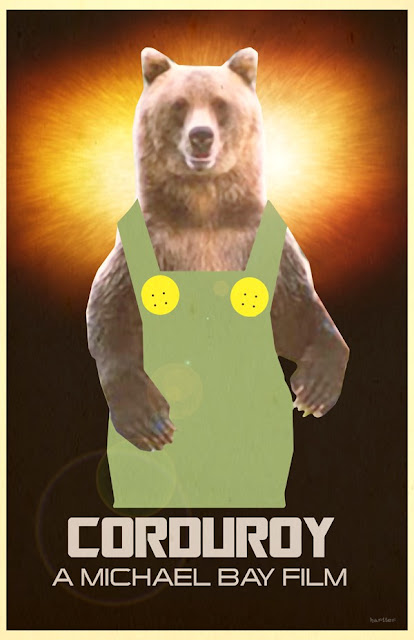 Illustration by the Illustrious Sean Hartter


A young, aspiring director and destroyer of treasured memories named Michael Bay was taking Hollywood by storm! Or, at least that’s what he hoped to do. Up until then, he had only done day work, directing Super-Dave Osbourne shorts and Toonces the Driving Cat skits on Saturday Night Live. While he displayed an almost supernatural gift for absurd scenes of unnecessary destruction, he wanted more. Michael was sure that all he needed was one good project, something to really sink his teeth into. 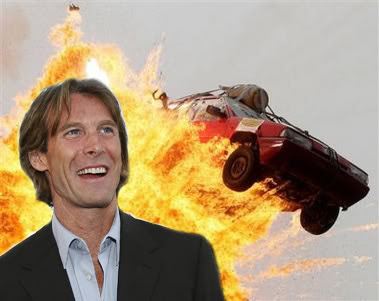 A film that could really show the awesome magnitude of exploding cars that he was capable of. On August 12th while vacationing with family, he ducked into a quaint used book shop. There among its adorably dusty shelves he saw it…his dream project. A small but beautifully illustrated children’s book called “Corduroy.” At first glance the precious book might not have seemed like prime action film material but Bay had a plan. He had a vision. AND he had a pitch!


The film pitch has long been an honored tradition that very few have ever done as well as Michael Bay. Of all the pitches he ever made, his Corduroy pitch reached almost legendary status. To this very day, directors and producers alike described the pitch with barely contained delight and why wouldn’t they? Just in case you’ve never heard its contents…folks say it went a little something like this.

The story opens in the home of a Navy Seal named Roy “Corduroy” Ross. He is standing at his front door in full uniform, packed and ready to go. 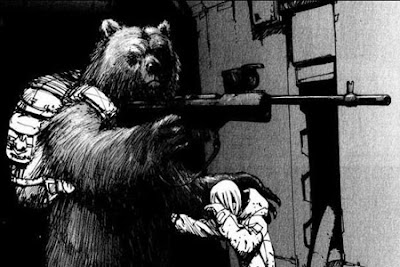 He is stern looking and very physically imposing. He is also a large Bear. His beautiful wife and adorable daughter stand, holding back tears and trying to prolong the moment until his departure. He steps forward to his wife and says “You take care of yourself, Sara”. She sadly smiles and gives a playful salute; “Yes Sir”. He salutes back with a serious look and says “At ease!” They stare at each other then both break out into laughter. As the laughter begin to subside he leans in and passionately kisses his wife and then they embrace…”You come back to me safe.” she whispers.

Finally it is time to say goodbye to his daughter. This is visibly difficult for him but he drops to his knees, pulls her into a hug and kisses her forehead. “Be good, my tough little soldier”

He finally stands and turns to go, taking one last look at the family he has to leave behind, then he turns and bravely marches down the front walk. Halfway to the car he is brought to a halt by a yell from his daughter.

His little girl rushes up to meet him, hugs him again and then hands him something. “Take this with you Daddy, so you won’t forget about me!”

He takes it and chuckles, “Baby…how could I ever forget about you?” He looks at the object in his paw and realizes it’s a button. A pink and blue button that says World’s Best Daddy! Smiling, he attaches the button to his uniform, smiles at his family and giving a little wave he climbs into his jeep and drives away.

The scene fades to black and then back up as we are now in the hold of a large airplane. The scene is darkly lit and loud. Seals in combat uniforms sit in a row against the wall. A large graying Bear named General Zummi Gumitski, shouts orders over the roar of the plane. The soldiers will be dropped behind enemy lines to take out a manufacturing depot responsible for the vast majority of all of the weapons and explosives that have been smuggled to the frontlines of the war. Recently the tides of battle have begun to shift in favor of the Bulls and this weapons depot has played a large part in that. The seven soldiers being sent must kill the guards, collect the files with locations of the remaining supply lines and destroy the facility. All of this must be done before a large convoy of Bull soldiers arrives to collect supplies for their journey to the front lines. The Bear soldiers collected are the best in the world and if any Bears can accomplish this nearly impossible task…it is them.

As the debriefing continues the camera pans down the line across the brave Bears willing to risk life and limb for the good of Bear Country. As we pass over the soldiers we see Yo Gi, Bradley PoohBear, Harris (Hair) Bear, Foster (Fozzie) Wakanson, Barry Louis (Balloo) and Garrison (Grumpy) Gloomstien. Finally we come to rest on our star, Corduroy with the look of a survivor in his eyes. Black camo paint across his face and a bright pink and blue button pinned to his chest! When the plane comes into position the Bears line up at the open door and one by one jumped without hesitation into the night air.

After landing and regrouping the soldiers set out on their mission. At this point in the film we are given a chance to get to know our central characters better. There is playful ribbing between the Bears as they let off steam in preparation for battle. This would be a great point in the movie for really witty action movie-type dialogue. Questioning each others Bearlyness. We really need to capture the hearts of our viewers in this scene, really make the movie going public care about these characters so we need to capture all of the powerful charisma and personality shown by legendary actors like Jean Claude Van Damme and Steven Segal!

As the Bear jamboree makes its way across the desert, the elite team playfully makes jokes and talk about their personal lives in inappropriately elaborate detail; almost as if they were in some sort of movie, rather than a serious and important military mission. Finally, they arrive at the weapons depot and the carnage begins. First two guards get silently killed by the cool ‘sneak up behind them and twist their heads around’ thing. Another guard gets the survival knife thrown into the back (classic!). Eleven more guards fire from atop the security wall and are all shot with machine gun, falling off one by one. Three of them do the Wilhelm Scream. After getting past the perimeter defense force they begin to Bear crawl on their stomachs into the heart of the base. Unfortunately not all the team members cared as much about stealth. Ever the maverick hothead; PoohBear suddenly charged forward, machine gun blazing. The silly old Bear took out nine soldiers before being brought down.

Unfortunately he also gave away any element of surprise the team might have had. Now the team had to fight in earnest. They fought their way to the center of the facilities and Corduroy secured the information they needed. All they had left to do was escape. Leaving a bloody trail of Bull behind them, the team stormed through to the exit. They crashed through the gate and walked away from the compound. Without stopping, Fozee threw a grenade over his shoulder and into the compound. In true, bad@#$ fashion, none of the Bears looked back as an explosion ripped through the blackness of the night behind them. They arrived at the designated evacuation spot. And Corduroy stopped dead in his tracks. As the rest of the team filed into the BlackBear Hellicopter, Corduroy just stood there looking down. His button. The button from his daughter was gone. It must have fell off in the fight. What to any Bear else may have seemed like the most trivial thing in the world became incredibly important. He had to have that button. He had to go back. 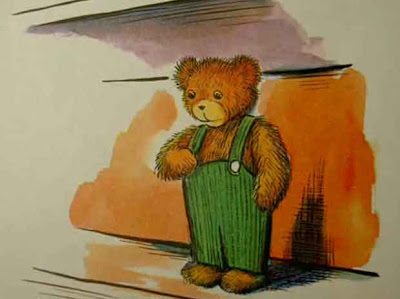 As the team filed into the copter he made his way back, ignoring the calls from his friends. With the enemy caravan soon to arrive and no other choice the team and the rescue copter left. And Corduroy Ross turned his back on safety and ran toward certain death. Corduroy arrived back at the sight of the battle at the same time as the enemy. He stared down at the Bulls in tanks trucks and all manor of military vehicles. As the enemy soldiers shouting at him in incomprehensible Bull-speak; Corduroy smiled, stepped into the light of the fire and shouted. “Gentlemen, I have come here to find my button and kick some @#$, and I don’t see my button anywhere!” Then he threw a grenade underneath the lead truck and as the soldiers scrambled from the impending explosion, Corduroy took cover. He fired shot after shot into the advancing Bulls as he continued to try to find the precious reminder of his daughter. 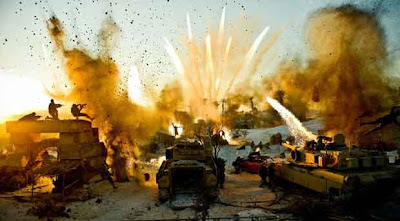 While the burning ruins of the base filled with Bull, Corduroy backed against a wall and fought with everything he was worth. The Bulls fired, hitting Corduroy in the shoulder but screaming he stood and fired into the crowd and soon the odds began to even. Corduroy poured rifle and machine gun fire into the waves of Bulls that poured from every doorway. Cars exploded, helicopters fell from the sky. A proud desert submarine fired its payload of sand torpedoes before crashing into the side of the depot. By the end of the main battle only a handful of Bulls stood between Corduroy and freedom. Grabbing the shoulder-mounted bazooka from a fallen Bull soldier, he destroyed the final group of Bulls and began to make his way beyond the rubble. Through exhaustion and blood loss he collapsed against an overturned tank and fell into a deep sleep. He slept through the night by the flickering light of the distant fires. 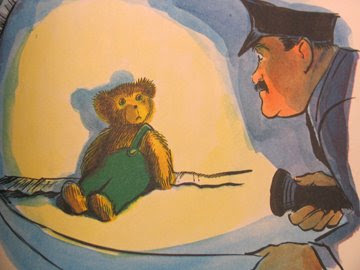 As the dawn broke Corduroy finally woke up filthy and bleeding but alive. He began to assess the situation. Looking across the desert and then beginning to inspect his wounds and equipment when suddenly something caught his eye. Something pink in the cuff of his pant leg. Bending down he retrieved the button that he thought was lost. It had been caught on his pants the entire time. As he began to walk into the desert, to freedom and to home, he started to laugh.

Be sure to check out the fantastic piece on Life with the Fandom! imagining a Brave Star film, by Michael Bay!
http://www.lifewithfandom.com/2012/03/league-assignment-7-next-childhood-gem.html
Christopher Tupa (League of Extraordinary Bloggers Champion) does it again!
http://ctupa.com/blog/?p=1228
Dex @ AEIOU finally finds a way for Bay to bug America (in a good way!)
http://aeiouwhy.blogspot.com/2012/03/league-post-bay-day.html
Posted by Claymation Werewolf at 5:14 PM