Every once in a while, the normally stark life of a retro pop culture blogger has its perks. Sometimes you need to step away from the minutes upon minutes of research that go into good cartoon journalism. It’s great to let my fur down every once in a while and spend some quality time with the fictional characters I write about. Now, normally when I go off on these little jaunts I’m ready to party down; go out drinking Meade, Grog and other renaissance festivaly sounding beverages with Link and Zelda, sit in raw sewage eating pizza with the Teenage Mutant Ninja Turtles, the list goes on an on. However a wolf can only take so much of that wild lifestyle before they begin to feel burned out. There are some occasions when my (much less often used) more dignified side surfaces. It was on one of these occasions recently that I found myself on a journey across Eternia, on the way to the royal palace. 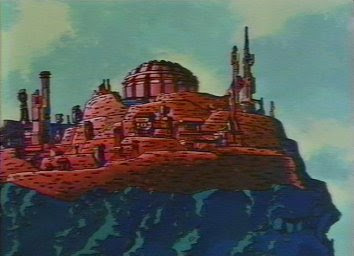 I rode my souped-up cherry red 1967 Attack Track across the beautiful countryside. It was a glorious day/night and I had an amazing view of the moons all 3 or…4 or however the hell many moons they had now. As I approached the majestic towers of the castle, I saw something I had never seen before around the palace yards. It was a sight that chilled my spine and turned my stomach. It brought an unbelievable sense of fear and revulsion. What I saw…was poor people. Or, at least they appeared to be poor…but as I began to draw closer to the castle, the true magnitude of the terrible situation that I found myself in, came in to focus. The drums, the banners and signs, the chanting and singing…there was no doubt about it, we were dealing with protestors. Yes hipsters, hippies and various other riff-raff had taken up position around the castle gates with one singular purpose; to bother classy people.


Like any self respecting citizen I quickly made my way through the unwashed hoards of peasants. I shrugged past the man-spiders and the dancing topless warrior women being sure to hold my breath and not make eye contact and suddenly I saw him. An old friend among the heathens! The noble spy and pine scented bog warrior, Moss Man! 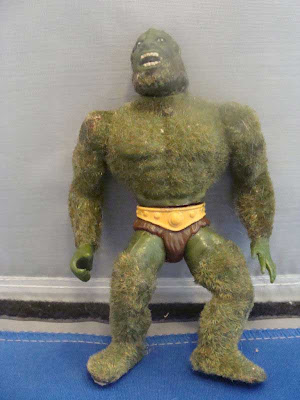 I couldn’t believe my eyes, a master of the universe in a drum circle! A DRUM CIRCLE! How could this have happened? I had to find out, so I approached my fuzzy green friend. It took a bit to get him to hear me above the noise and even longer to get my dazed friend to recognize me. When I had finally gained most of his attention I asked what on earth he was doing there among the rabble. Was this one of his spy missions? He chuckled and replied “No man I’m not spying! These,” he gestured toward a half mosquito-half human and a Viking jamming on acoustic guitars, “are my people.”


“Your people?” I said incredulously, “These hairy weirdos? You belong among gladiators! You were a titan! You used to compete in mortal battle with the forces of Skeletor! Or at the very least you hung out with people who did!”

“I aint fightin Skeletor no more man, I aint fightin nobody…‘cept of course for the man! See we gotta stay vigilant! Those fatcats with their fat-battle cats up in their ivory towers. They want nothing more than to keep the common man-beast down! It’s ALL corrupt, man. The government takes the money, they spend it all on their Orko magic and they funnel the money to their war machine cronies at Man-at-arms-Iburton. And they make weapons man, Vehicles of destruction. Sure they don’t really work half the time and just serve as plot devices for their comedic action misadventures! But that money could be used for peace! Our group leader Ralph Evilseed says that just 20% of our national wealth could be used to grow enough plants that vegetation could take over the kingdom! Take it over for peace, man! We got demands! And we will continue to occupy Eternia until we get some attention. My buddy Jake Stratos flew up and dropped it into one of their “royal windows!” It was written on EterniHemp. Real paper! Paper from the Earth!…er…from the Eternia.”

I asked what types of demands they had…what they wanted..

“Well, you know man…stuff! We demand no more war! Bring that money home cause we gotta get social programs for social stuff. Education for everybody! We gotta learn, man” He then leaned uncomfortable close to me, grabbed me by both shoulders and looked me in the eyes, “We…gotta…learn. And the clothes, man! They cut the common man’s snake-themed clothing allowance by almost 75 percent! Now that is a lot of percent…Too much percent!” The crowd began to chant…”Too much percent! Too much percent!”

“Now as for me” he continued “I usually just wear armored briefs, but the snake clothes are like super important to some people”

I could not believe what I was hearing…it all seemed like a cruel joke. “What about the thrill of battle?” I asked “The feeling that you’ve won the day? The moral at the end of the episode” He waived a hand. “No, man. All that battling the forces of evil, that is for the birds, man. There are so much better ways to feel like you’ve won the day…and after a while all those problems just seem to…you know, go up in SMOKE” I stood confused staring blankly at him. He may as well have been speaking a different language. He went on; “You know man” He put two fingers together and raised them to his lips mining someone smoking. I shook my head still not anywhere near understanding.


“Plants? Smoking? You know…Moss! The Moss, Man!” Tired of trying to figure it out I did what I do best. Pretend to understand things that people say to me! “Ah yes the uh…moss who could forget that…very good!”

“See, man after the royalty checks for He-Man started to run out, I fell on some really hard times. For a while me and Beast Man had a practical joke show. People always thought we looked alike and we would show up places dressed like each other…it did okay but it started to wear thin, really fast and then when Beast Man mauled that guy it was over. From there it was a steady downward spiral; I couldn’t get any work and I went to a really dark place…I went to the Snake Pit.”

The Snake Pit was a strip club on the south side of Eternia…a bad neighborhood…I really felt bad for my old friend. Those people don’t even tip! 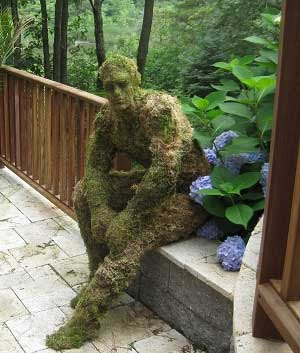 “I made what little money I could to feed my algae habit but it was never enough and then one day while I was walking home in the rain with my hands plunged in to the pockets of my denim jacket.”

“Dude! Will you let me finish the story! AAAAnyway…I had hit rock bottom and I was lost in thought but suddenly something started breaking through my fog; a beat. This amazing drum beat. And then I saw them…some really great looking guys playing away on some 10 gallon plastic pickle tubs! They smiled at me and waived and I sat down and joined them…we got to talking…and then later we talked all night at this great coffee shop and they started to tell me about The Movement and it was like something was woken up inside of me, man! This was what I needed. This is the REAL fight I had been waiting for my entire life! I hit the ground running, making signs, going to rallies and really making a difference! We’ve already got a whole bunch of stuff for some poor kids somewhere! Poor kids, man! And the environment’s getting cleaned…I mean sure we kinda threw a bunch of crap on the ground here but believe me man it’s getting cleaned other places! I feel like I can take over the world man. I don’t have to just blend in with trees and smell like a car air freshener anymore. These people love me for me. I can be all the moss covered swamp beast I CAN be! I’m more mature than I…I uh…ummm excuse me bro, I see a circle forming over there and I feel an urge to go Pass the Dutchie on the Left Hand Side if you know what I mean haha!”

I still didn’t have any idea what he meant but as I spent some time in the palace later I really started to think…maybe I was to quick to judge this group. Maybe they were right and they should have more power…they should get the things they felt entitled to…after all when it came right down to it weren’t we all equal? Didn’t we all want the same things out of life…Happiness? Free stuff? And the freedom to do whatever it was those hippies wanted to do with moss? I think we are all the same and should learn to treat each other that way! Once I was done considering this I contacted the Palace police who roughed the protesters up, threw them in the back of a police hover-wagon and took them far out of our sight.


After all, equal is equal but Eternia has one of the most beautiful palace gardens in the galaxy and they don’t need a bunch of filthy hooligans trampling it.