We are presented with the familiar logo for the Quick Witt cartoon company as the soft sounds of a  music box slowly plays.

As the screen fades to black and then fades back to light, the music begins to take on an eerie and disturbing quality as a castle comes into focus. A beautiful and exotic castle. A music box castle under a gathering storm. 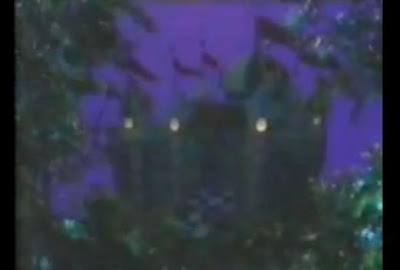 Eureeka, a young wizard, screams to her loyal dragon friend, over the howling wind.

“Magellan, there’s got to be something I can do. I must protect the castle. Must protect all of us!”

It seemed the deity that the inhabitants of the castle revere above all others, a formerly friendly giant has gone mad. The imagination that once kept the very heart of the castle beating has become twisted and insane; plagued by waking nightmares that are very real. 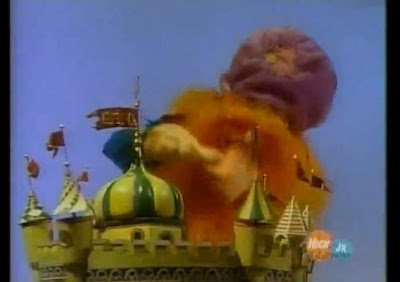 Because of the power the giant had over the castle, his nightmares came to life; in the form of unfamiliar creatures drawn across the land to the castle itself.

When the battered and lifeless body of the brave Sir Klank was thrown violently over the wall, they realized how fatally naïve these beliefs were.

The lifelong friends now joined together, toward the most important purpose they had ever faced. To defend the castle walls and save their own lives.


The quirky character flaws that had once been so charming, now threatened the very existence of everyone in Eureeka's castle.

Magellan, the dragon inadvertently smashed the castle doo'sr support beam with his tail, allowing 3 nightmares to slip through the gates and terribly wounding two guards.

Batley’s near-sightedness failed him on the tower walls. And his arrows missed their mark but brought the life of Mr. Knack to an end.

Horrified and helpless, Eureeka climed to her room within the highest tower and begin to pour through the all of the magic tomes at her disposal. Finally settling her eyes upon a book she never thought she would have to touch…a book of incalculable evil. The Evil Book of Evil

And as her dragon friend held the nightmares at bay, she began to read. The wind rising in strength as her voice grew louder; reciting words that while foreign to her mind flowed easily upon her tongue as if they were spoken from the mouth of another. 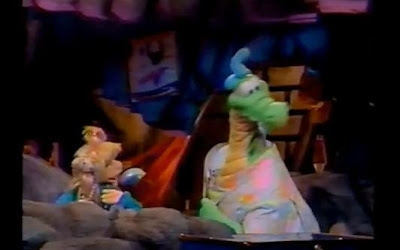 At that same time in a land very different; a young man, battered and broken, shouted words of his own from a book just as evil. His single remaining hand clutching the leathery face stretched across its cover, he sought to banish the evil that took his girl, his friends, his hand and finally… his mind. Shouting the words in the book (incorrectly). 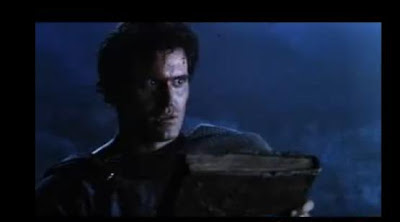 He opened a portal and was at once ripped blindly from the only reality he had ever known and dragged shrieking through a portal of darkness until he was slammed unceremoniously onto the ground. Within the walls, of Eureka’s castle.


Ash rises to his feet, dusting himself off with the hand that wasn’t a chainsaw. Before him stands Eureeka, Batley and Magellan. The young dragon stares in horror, towards Ash and begins to stammer "mmmm m-m-m-mmmMONSTER!!"

Ash holds up his hand. "Listen, you overgrown iguana, if anyone’s the monster here, it ain't m.."

His words are cut short as the Dragon blasts an immense ball of fire toward the new arrival. Ash begins to duck as the flames billow past him and engulf a shrieking hideous deadite, quickly reducing it to a smoldering heap. 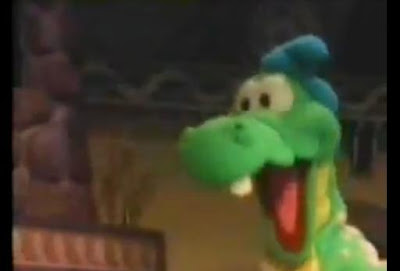 The dragon stands horrified. “What, what have I d-done?”

Ash steps forward, “Kid, ya' done good, that’s what ya done!” He stares at his new allies…. weirder than normal, but hell, he’s survived all kindsa weird. Weird was his life now. “Name's Ash Williams, Housewares.”

The young wizardess steps in front of her friends and finds her voice “And what are you? Another one of the giant's nightmares?”

"Listen lady, or whatever the hell you are, this whole thing is a nightmare. But I’m doing my best to clean it up… now you felt freaks can join me or get outta my damn way…. Either way, I’ve got some preparations to make. What do you stuffed animals got for weapons?”

Batley piped up. “We never needed any weapons and we don’t need no filthy, loud-mouthed weirdo telling’ us what to do!”

Ash quickly turned, drew his shotgun and shot a Nightmare that was clawing its way through the window. 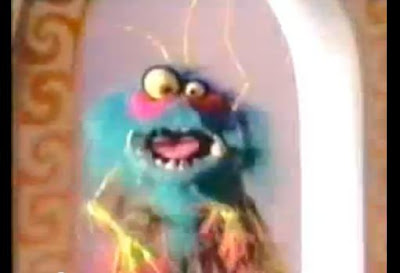 “No need for weapons huh? Take a backseat, geek”

Ashly shook his head “Jeez, I'm supposed to save the world with some wizard-wannabe, a winged nerd and their idiot iguana friend?” 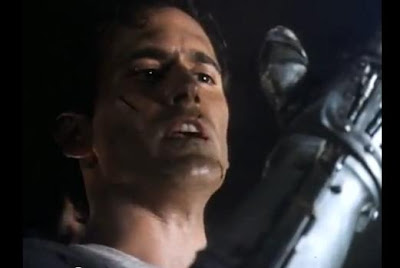 As time passes the team begin to hone their skills and begin to become as hardened and vicious as plush-lovable puppets can be. They began to fortify the castle and turn any machine or appliance that isn’t totally necessary into a weapon. After weeks of training, the denizens of Eureeka's Castle become nightmare-slaying machines and we are treated to a delightfully violent montage with Ash doing his Ash thing, and the puppets doing their best.


Magellan crushing three nightmares in one thunder-like smash of his tail.


Batley dropping from the shadows upon an unsuspecting Nightmare and savagely ripping into its neck.


Two Nightmares making their way across the moat until two mud-covered furry twin creatures arise from the bog and pull the intruder beneath the surface, tearing them apart.

Ash shooting a nightmare point-blank with his shotgun before cutting a second one in half with his chainsaw, sending blood and foam rubber everywhere. 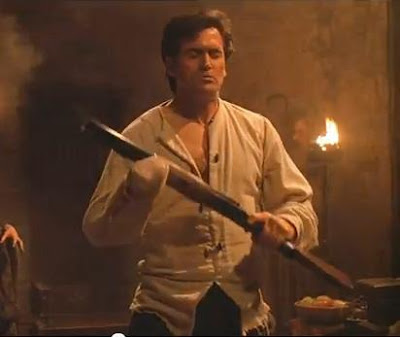 As this crowd-pleasing violence unfolds, Eureeka stays hard at work devising some way to keep the hideous nightmares at bay and wake the giant from his insanity once and for all. Pouring through page after page of the Evil Book of Evil!!! A plan begins to unfold.


Finally, the day has come and she gathers all of her friends to the tower. She stands staring into the dastance, her arm clutched around the book of magic as she beings to speak the magic words 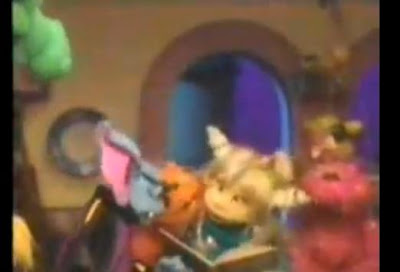 “Book of Evil hear my plea!”


“Sends these nightmares far from me!”

“Portal open and send our foes“”

“Far away and long ago!”

As she continues to speak, an immense portal opens behind her, swirling and pulling every loose object into its gaping maw like a black hole.


Eureeka shouts to be heard over the din. “Quickly, Ash! I need the second book to call the nightmares to me and be rid of them forever!”

Magellan moves to action. “It’s okay, Eureeka! I’ll get it!”

And as the immense dragon turned to fetch the book for his lifelong friend; his powerful tail, as it had done so many times before, swung. Ash was knocked across the room, slamming into Eureeka and the two disappeared instantly into the portal.


They fall (again) to the ground and Eureeka immediately shouts “Magellan. No! Ash we have to get back! We have to save my castle! We have to…to…”

Ash stared in terror over her shoulder. “Listen, you hairbrained hippy! Before we can worry about your weird music box house, we got bigger fish to fry. How about you think of a plan for saving our own skins!”

She slowly turns and looks up to see what Ash was staring at as two huge figures loom above them and suddenly the air is shaken by a booming voice.


“Francine, you’ve been neglecting your housecleaning…we’ve got vermin!” 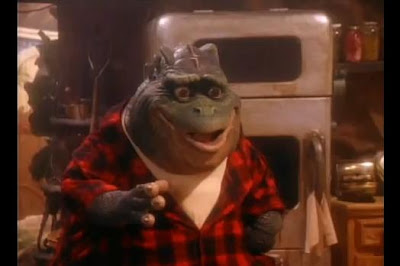 
also coming to a theatre near you...

Saddle up with Brian for the ultimate western!

find out WHO the BORG are in this weeks life with the fandom!

Christopher Tupa works Tales of the Gold Monkey into his fantastic list of crossover ideas!

Posted by Claymation Werewolf at 11:27 PM